In August, a mighty force swept through and shook up the Stickle household, changing our lives forever. 53 pounds of chocolate love joined our family. We named her Roux. She is our wild woman. 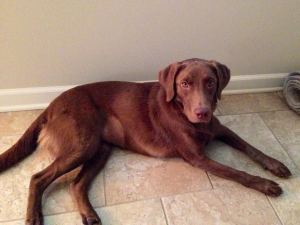 Text: “Went to PetSmart for cat food and came home with this!”

We walked into PetSmart to pick up cat food and left with her in tow. CARA- Companion Animal Rescue of Ascension had their adoption day banner posted outside of the store and I found myself saying to Will, “I wonder if they have dogs today?” Never before have I ever wondered this when we happened to be shopping on an adoption day, or have we actively sought out looking at the dogs. If anything, I always found a cat that I left begging Will to let me adopt. But on that day, I wondered. And that is the first thing we did, we walked in and went straight to the dogs. We got our cat food and got in line to check out. I looked over and saw a crate sitting by itself in between a couple of sales racks and pointed it out to Will. “Look we missed that one.” So we stepped out of line, walked over to the crate, and there she was! The dog Will dreamed of. I promised him throughout the years that when we had a house with a yard, I would get him a big dog. A big dog he could run with and wrestle with. His answer was a chocolate lab. I tried to steer him in a direction of something mixed with a poodle. You know, any kind of big dog I could think of that did not shed. But his answer never wavered. Chocolate Lab. And there she was, right there in front of us in need of a home. “Do you want me to get her for you?” He seemed torn. We got our cat food and left. In the parking lot I asked him again. His, “no,” wasn’t as confident, as definite, as it usually was all the times I’ve tried to take home every single cat. I could tell she was tugging at his heart. We got in the car, and I pressed it again suggesting, “let’s just turn around and ask if she can come out of the crate to pet her. Let’s turn around to find more about her story and her disposition. If we wait to see if she’s there next weekend, we’ll lose her.” He said yes! I spun that car around so fast and we went back. CARA is a wonderful organization and passionate about their calling. The foster mom, Susie, wasn’t there volunteering at the time we were in the store, but she drove from her house to PetSmart to come talk to us about Roux and tell us all she knew about her. They allowed a “sleep over” so we were able to take her over the weekend to see how she did with Sassy and June Bug before officially committing to the adoption. Susie even came to our house once we got home to bring the food she had been feeding her, and copies of her paperwork just to make sure we had everything. It amazed me how invested she was in this dog, when she has several of her own to take care of.

I love how a word can just grab a hold of you and sink down in your soul with its meaning. At the beginning of the year, my support group chatted about having a word for 2015. Patricia’s word is powerful to me. Rescue. I wanted to submerge myself in that word, rescue. Dig in a little deeper to its meaning- to reclaim, deliver, redeem, set free, save. Words can be excellent reminders. When I heard her say that word, the first thing that came to mind was, Roux. She has helped heal a broken heart from a year of failed fertility treatments. She has breathed life back into our house. 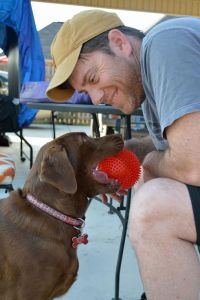 My friend, Heather, put it perfectly when she described the reasoning behind her and her husband’s decision to start fostering dogs again, “I just needed something to mother.” God saw my need to mother and placed her there on that day for us to find. God didn’t just see my need though. He saw Will’s need too. He brought us THE dog that had been on Will’s heart. A dog for us to rescue and one that would more importantly rescue us.

He grants the desires of those who fear him; he hears their cries for help and rescues them.” Psalms 145:19

Bethel Music is a new discovery of mine. I went to their night of worship with Melissa, and they prayed for infertility. You heard me correctly friends! A concert so big there was a line of people wrapped around the entire building long after the doors had opened. Out of anything in this world that they could have prayed for healing over, they chose infertility. Melissa said, “it’s like God saw us.” And it just slapped me right across the face. He did. This entire time he has noticed me! He’s noticed us! They even sang a song that night with the lyrics, “what a mystery that you notice me. And in a crowd of ten thousand you don’t miss a thing”  Duh. Hello Mary Claire. Out of the thousands of people in the crowd that night, he noticed Melissa, me, and any other person standing in that room struggling with infertility. It shook me to my core. I needed my friend Melissa there to point it out because, otherwise I would not have recognized it as being noticed unless she phrased it in that way. I did not realize how much it mattered to me, to matter to God. Right there I was reminded of that word again, rescue. He will rescue me. He will set me free.

Her red ball. All day, everyday

You know, Hannah, in the Bible? We talked about her story recently in my support group. About her feelings and her actions. Despite her desperation for a baby she continued to pray, to worship. God rescued her and redeemed her tears. He answered her prayers and gave her a son, Samuel. It’s so meaningful to me that Hannah’s story was included in the Bible. Through Hannah, God wants anyone struggling with infertility to know that we are not forgotten. Infertility is important to God. God sees me, and He sees you! Even though I may at times feel forgotten or abandoned, my feelings and my faith are not the same. Despite my sadness, I need to press on. To continue to pour my heart out to God. Despite my bitterness, I need to press on. To continue to thank God for my baby. God knows that I need constant reminding of not being forgotten. I just have to notice Him! To look for Him in my everyday, because he is right there. To look at Roux right in front of me and be reminded of, rescue.

Roux has not come without challenges. She is a patience builder! I grew up in a family of animal lovers, however, I’ve never had a big dog. She’s a completely different world. And quite the opposite of my sweet, perfect, angel Sassy who can win a gold medal in the sleep olympics. I did obedience classes with her because I knew with Will working out of town so much, I couldn’t have a big dog drag me down the street when I’m walking her. For five weeks my mind was focused on training this dog. We had daily homework. If anything, she was the best distraction from the recent decision of a “break” from treatment we were stepping into and had know idea how long it would be before we could go back. She returned me to feeling a little bit like my normal self again. She can throw a ball (her beloved red ball) for hours and still have energy. She has gotten me up and out of the house for her daily walks. I gave up on the couch battle after fighting her off of it for four months. As crazy as she is, and I mean wild. She is the most affectionate and loving dog I have ever had. She’s Will’s best buddy. They wrestle, and run, and love on each other. There is a Roux story everyday. My neighbor called me one day as I was stepping out of the shower, “are you missing something?” Roux had broken out of our house, ran over to their house & broken in, where she found her eating their dog’s food in the kitchen. Typical Roux. I bring her once a week to Camp Bow Wow, which is worth every penny, and think this is what being a mom doing carpool must feel like. When Will is out of town, she wears me out completely. But all of it is worth it and not for a second have I thought about giving up on her. Just like God has not given up on me. On her walks, she’ll look up at me with a thankful smile and I return the same smile while resting in that powerful word, rescue.

Will and Mary Claire 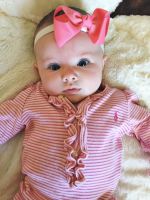